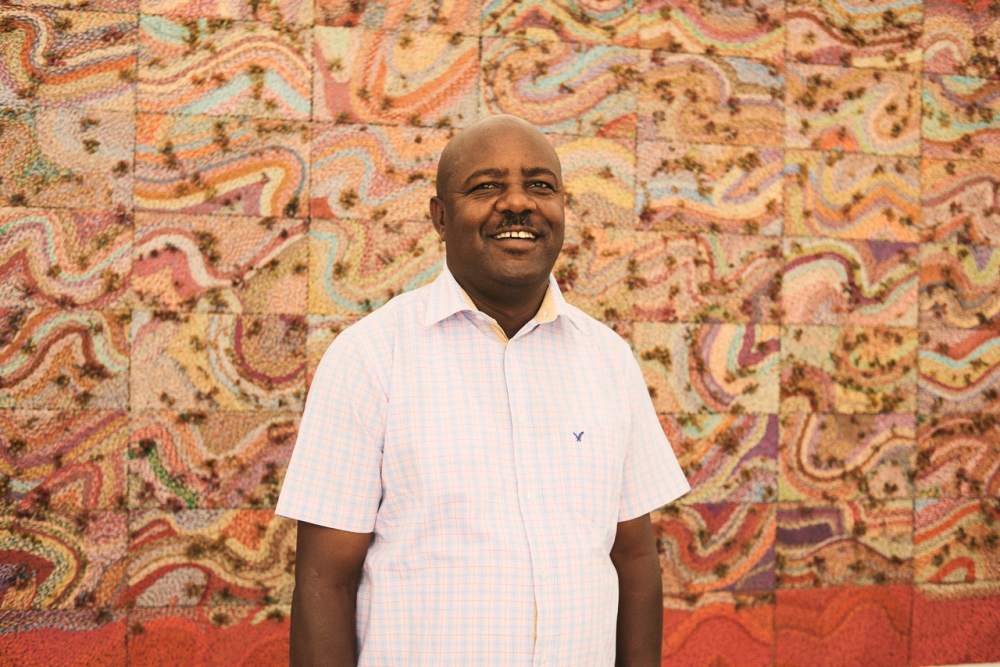 Join Lawrence Weschler and Maaza Mengiste on Friday, March 26 for a lunchtime discussion of the work of Elias Sime. This conversation will take place while Elias Sime's new exhibition TIGHTROPE: ECHO!? is on view at 48 Walker St. Click here to watch a recording of the conversation.

Lawrence Weschler, a graduate of Cowell College at UC Santa Cruz (1974), was a staff writer at The New Yorker for twenty years (1981-2001), where his work shuttled between political tragedies and cultural comedies, and then for thirteen years (2001-2014) the director, now emeritus, of the New York Institute for the Humanities at NYU, where he insisted on counting the sciences as one of the crowning jewels of "the humanities."  He has been a regular contributor, among others, to the New York Times magazine, Vanity Fair, Harper's, McSweeney's, The Believer--and is the author of coming on twenty books, including Seeing is Forgetting the Name of the Thing One Sees  (a life of artist Robert Irwin); Mr Wilson's Cabinet of Wonder (on the Museum of Jurassic Technology); Vermeer in Bosnia; Everything That Rises: A Book of Convergences; Waves Passing in the Night (on Walter Murch in the land of the astrophysicists), and now, And How Are You, Doctor Sacks? (a biographical memoir of his thirty-five-year friendship with the neurologist Oliver Sacks).

Maaza Mengiste is a novelist and essayist. She is the author of the novel, The Shadow King, which is shortlisted for the 2020 Booker Prize, and was a 2020 LA Times Book Prize Fiction finalist. It was named best book of the year by the New York Times, NPR, Elle, Time, and more. The Shadow King is now available in paperback and was called “a brilliant novel…compulsively readable” by Salman Rushdie. Her debut novel, Beneath the Lion’s Gaze, was selected by The Guardian as one of the 10 best contemporary African books and named one of the best books of 2010 by Christian Science Monitor, Boston Globe, and other publications. She is the recipient of an American Academy of Arts and Letters Award in Literature, the Premio il ponte, and fellowships from the Fulbright Scholar Program, National Endowment for the Arts, and Creative Capital. Her work can be found in The New Yorker, The New York Review of Books, Granta, The Guardian, The New York Times, Rolling Stone, and BBC, among other places.

Watch Here
Back To Top